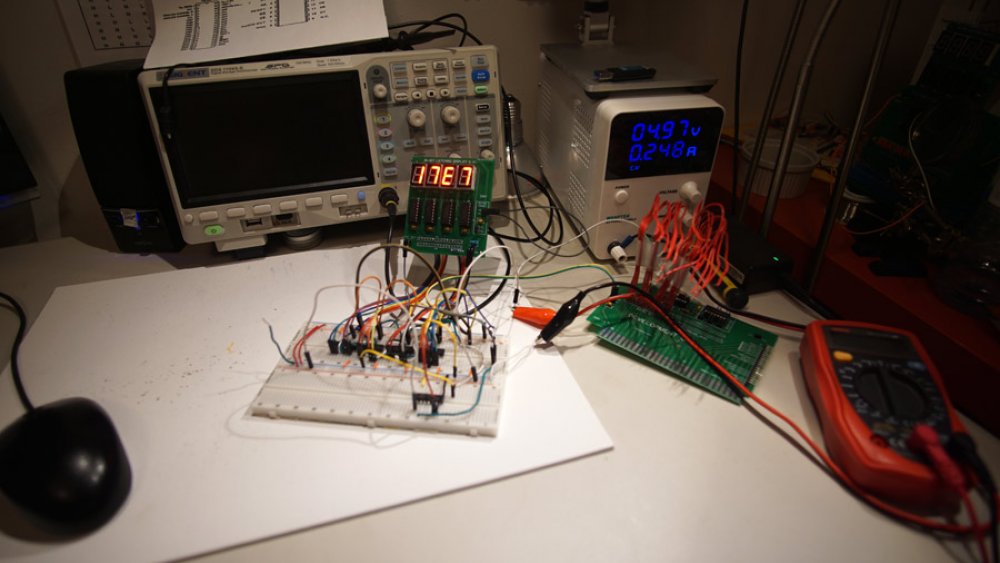 I made some modifications to the counter prototype, including gating the clock with a 74LS08 (quad AND gates), but it seems to have picked up some quirks. I was not able to adequately test at 10Hz... it was just fast enough to make it hard to catch errors with the naked eye, but just too slow for my oscilloscope. I ended up soldering up a second 555 based clock, this time running at a sedate 0.5Hz, giving me nearly two seconds to see each increment or decrement.

At the slower speed the issue became clear. The low 4-bits were displaying values out of order, and the issue turned out to be a couple of crossed jumper wires between the first counter IC and the first mc14995 display driver. Those crossed wires should have been an obvious place to start, but at 10Hz I could not tell the first digit was displaying values out of order, I was barely able to see that it seemed to skip values.

The interesting part to all of this is I learned of a limitation of oscilloscopes (or at least, the Siglent 1104X-E), namely they cannot "scope" frequencies below 10Hz. I honestly had no idea there was a lower limit.

I tested my first live-stream on Sunday, Feb 2nd, and while the stream is boring (and I do not recommend you watch much of it), the working counter is displayed for the first portion. The distortion and feedback was caused by a friend's video-chat.

I may do live-streams in the future, but they will be planned... I'll be prepared.